Tweet
"To die will be an awefully big adventure."

Tweet
"Children have the strangest adventure without being troubled by them." 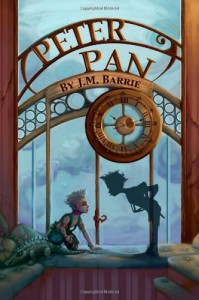 "Children have the strangest adventure without being troubled by them."

"All Children, except one, grow up."
Peter Pan is the story of youth. The struggles of remaining young and the price one has to pay for it. It's a delightful story, amusing and bittersweet, but always heartfelt.

Captain Hook: "Pan, who are thou?" he cried, huskily.
Peter Pan: "I'm youth, I'm joy," Peter answered at a venture, "I'm a little bird that has broken out of egg."

Peter Pan is a young boy, in my mind he's not older than 6 or 7, who lives in Neverland (Address: Second to the left and straight on till morning) along with his loyal and lovable followers, the lost boys. Neverland is an ethereal world filled with danger and peril:
"Of all the delectable islands the Neverland is the snuggest and the most compact, not large and sprawly, you know, with tedious distances between one adventure and another, but nicely crammed."

The Darlings
The book opens with a glimpse of the Darling family and their three children, Wendy, John and Michael; and there's Nana as well, their family dog-cum-nurse. The first few chapters paints one of the most beautiful depictions of a loving family, ordinary but never forgettable. A heart-rending and cherished portrait. There are moments both funny and nostalgic which left me mesmerized. I especially loved the medicine-duel between Mr. Darling and young Michael where the father cheats the young boy, much to Michael's indignation and children's collective anguish. But the atmosphere has a melancholy mist hovering over it due to the knowledge of an impending sorrow. The scene between Michael and Mrs. Darling is extremely touching and assumes an aura of added tenderness because of what is to come.

The first mention of Peter Pan comes in a strange way. Barrie writes:
"It is the nightly custom of every mother after her children are asleep to rummage in their minds and put things straight for the next morning repacking into their proper places the many articles that have wandered during the day."
A beautiful rendition of how mothers instinctively know the deepest desires and fears in their children and how they strive to allay the fears in children's mind, by soothing and comforting them. Mrs. Darling comes across the name Peter while rummaging through Wendy's mind.

Trivia
[Note: An interesting aside is that if you've read, or are reading, Locke and Key - Head Games, Chapter 2 you'll find that there is an event where Bode Locke gets his mind examined and Kinsey and Tyler observe a strange woman in his mind. Joe Hill (the creator of Locke and Key) seems to have taken a leaf from Peter Pan.]

Also, I think I found the earliest reference to the term, "Puss-in-boots". It's the name of Tinker Bell's mirror. :)

The Story
Peter Pan and Tinker Bell take Wendy, John and Michael to Neverland where they meet the lost boys, the pirates, the red-indians, mermaids and a crocodile with a ticking clock. The adventures in Neverland are wonderfully crafted and evokes the child in you. Barrie was, clearly, adept, in holding the attention of kids with his fertile imagination and I doubt any kid would get fidgety if you read them from Peter Pan. Perhaps this is one of the reasons why Peter Pan has become such a well-known character. Peter is a unique boy - conceited, narcissistic, charming, brave, indomitable, a leader but also vulnerable, seeking love and care. The lost boys are the most loveable crew you can find.

Captain Hook and his pirates also evoke not entirely bad feelings. Hook is portrayed as a flawed but still loveable man who's also vulnerable.

"They were his dogs snapping at him, but, tragic figure though he had become, he scarcely heeded them. Against such fearful evidence it was not their belief in him that he needed, it was his own. He felt his ego slipping from him. “Don’t desert me, bully,” he whispered hoarsely to it".

What did these paragraphs mean?
"While she slept she had a dream. She dreamt that the Neverland had come too near and that a strange boy had broken through from it. He did not alarm her, for she though she had seen him before in the faces of many women who have no children. Perhaps he is to be found in the faces of some mothers also."

"She started with a cry, and saw the boy, and somehow she knew at once that he was Peter Pan. If you or I or Wendy had been there we should have seen that he was very like Mrs. Darling's kiss."

After completing the book I went through the most wonderful and insightful introduction provided by Ms. Amy Billone (Goodreads Author) and here's what she wrote:
"No matter what his successes were in coaxing his mother to laugh, he could not make here "forget the bit of her that was dead" (p. 19). Often she felt asleep speaking to David. Even while she slept, her lips moved and she smiled as if the dead boy had come back to her."

Mrs. Darling's kiss was the longing/memory of Peter. The fact that she saw his face "in the faces of many women who have no children. Perhaps he is to be found in the faces of some mothers also." points to this fact.

In the closing stages of the book Peter takes away Mrs. Darling's kiss and she seems content. Perhaps, Peter finally freed her from this longing of him. A mother was finally able to let go. This was a happy ending which Barrie always wanted for his own mother but was not to be.

I'm content with the above explanation but something still rankles in my mind. Why did Barrie changed the "Smile" to a "Kiss". Was it that just like Wendy, Mrs. Darling also loved Peter once, as a companion? And when Peter found Wendy he took that kiss from Mrs. Darling to signify that things have changed between them? I don't know.

I leave you with perhaps the most memorable line of Peter, standing on Marooner's rock, facing the prospect of inevitable death:
"To die will be an awefully big adventure."